Since we moved back to San Francisco last year, I’ve been taking pictures of places of literary and artistic note in the city. I published a post on “literary life in North Beach” on my agency’s blog. This is an ongoing and less geographically restrictive diary of the city’s literary, artistic, scientific, and political history.

202 Green Street, where on September 7, 1927, under the auspices of William Crocker (grandson of the transcontinental railroad magnate Charles) and the Crocker Bank, Philo T. Farnsworth and his “Lab Gang” sent the first TV signal ever broadcast to the Merchants Club about eight blocks away.

576 Green Street, where The Cellar on Green Street was located, where Kenneth Rexroth and Lawrence Ferlinghetti first introduced poetry to jazz in the Fifties.

1398 Grant Avenue, where “the social center for the Beats,” the Coexistence Bagel Shop, was located.

601 Vallejo Street, Caffe Trieste, where Francis Ford Coppola wrote the screenplay for The Godfather, and which attracted beat writers, comics, and hippy-era musicians.

Broadway and Columbus, where Ginsberg was first dropped off in the city, and 1010 Montgomery in San Francisco, where he wrote Part One of Howl. 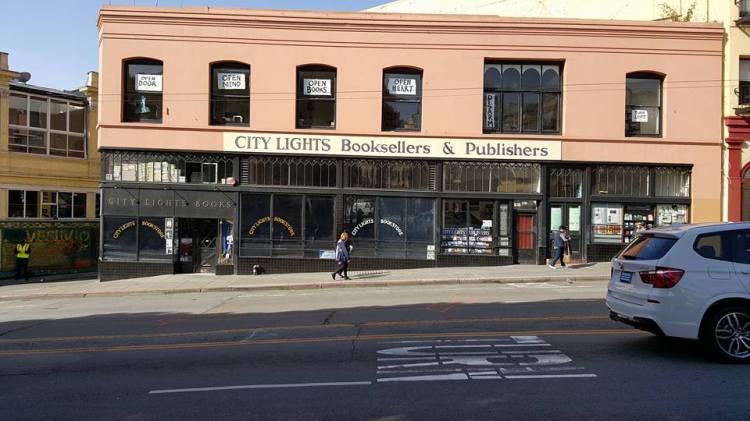 261 Columbus, City Lights, owned by the poet Lawrence Ferlinghetti, publisher of Ginsberg and others and author of A Coney Island of the Mind. 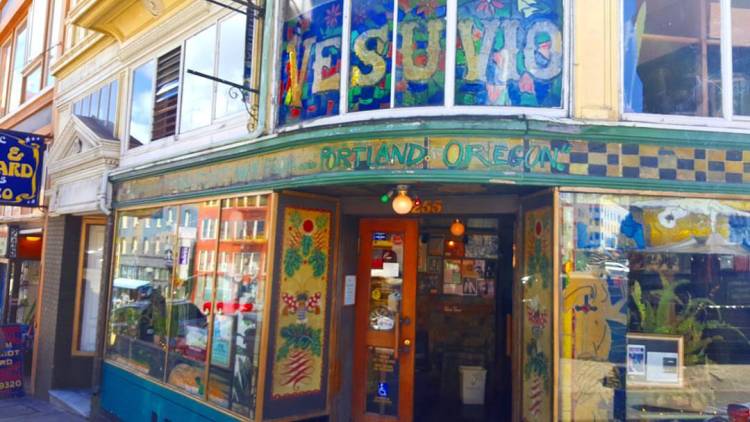 255 Columbus Avenue, Vesuvio Cafe, where Dylan Thomas drink, Jack Kerouac got loaded and held forth on his frequent trips and short residences in San Francisco in the mid-1950s, and from which the poet Gregory Corso got eighty-sixed.

848 Pacific, former location of Isadore Gomez’ Cafe, the model for Nick’s Pacific Street Saloon in Saroyan’s 1939 play The Time of Your Life. 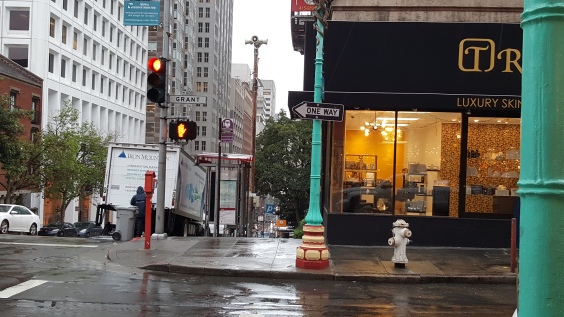 660 California, Old St. Mary’s Cathedral, the city’s first cathedral, built in 1853-4. It burned down in 1906, melting the bells, and leaving the exterior walls and bell tower. It was rebuilt in 1909. The plaque on the bell tower, which says “Son, observe the time and fly from evil” (from Ecclesiastes) was directed at the men heading for the once-plentiful brothels. On the nondescript coroner opposite the church (SE corner of Grant and California) was where  the Emperor Norton died in 1880. 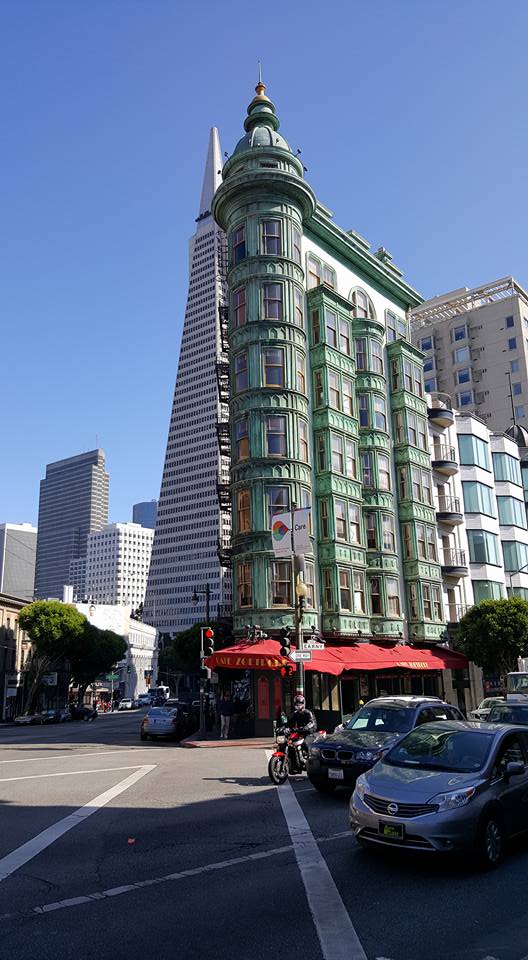 900 Kearny Street, Columbus Tower, formerly the Sentinel Building, erstwhile home of the hungry I nightclub and the Kingston Trio, and home since 1972 of Francisco Ford Coppola’s Zoetrope Studios.

735 Montgomery, location of the first Jewish religious service in San Francisco in 1849. 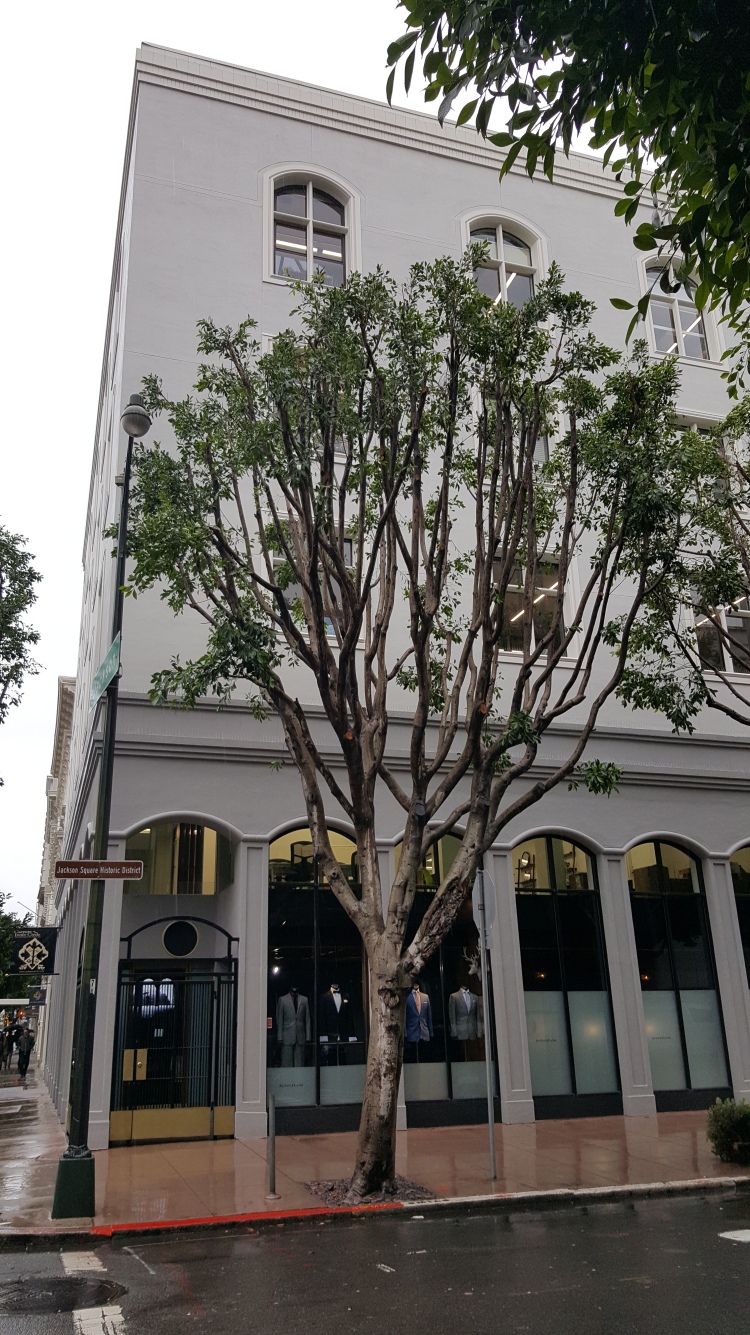 732 Montgomery, offices of the Golden Era, for which Bret Harte was editor and Mark Twain was a writer.

728 Montgomery, where on the third floor the painter Maynard Dixon had his studio from 1913 to 1938. It was also, in the 1860s, the offices of the The Californian, for which Bret Harte was editor and Mark Twain a reporter. The Emperor Norton, who lived around the corner, was a frequent source for Twain.

716 Montgomery, where Frida Kahlo had her studio when she and Diego Rivera lived in 1930.

710 Montgomery, the Black Cat, a bohemian bar where William Saroyan, John Steinbeck, and Kerouac drank, among others, but which transitioned into a gay club in the 50s, where the Widow Norton (José Sarria) got her start as a female impersonator.

600 Montgomery, where the TransAmerica Pyramid now stands the Montgomery Block, a four-story building built in 1853 (and the tallest building west of the Mississippi at that time) provided studios and apartments where Mark Twain, Bret Harte, Frank Norris, Ambrose Bierce, Robert Louis Stevenson, Jack London, and Emma Goldman lived or stayed. Midway through this block, opposite Merchant Street,  were the offices of the San Francisco News Letter and Commercial Advertiser, employer of Ambrose Bierce.

Washington Street, on the north side between Kearny and Montgomery, former location of Maguire’s Opera House, where Mark Twain gave the reading about Hawaii recounted in Roughing It and where 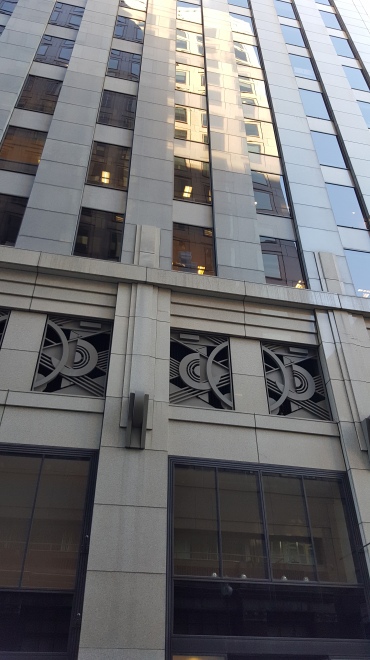 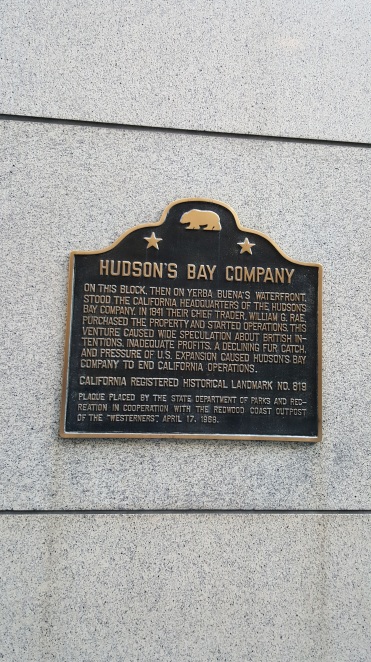 This plaque, at 243 Sacramento, marks the former location of the headquarters of the second San Francisco Vigilance Committee in 1856. Like the first in 1851, it arose in response to widespread corruption in city government and the courts. But in the end, it was a mob and its executions, murders. 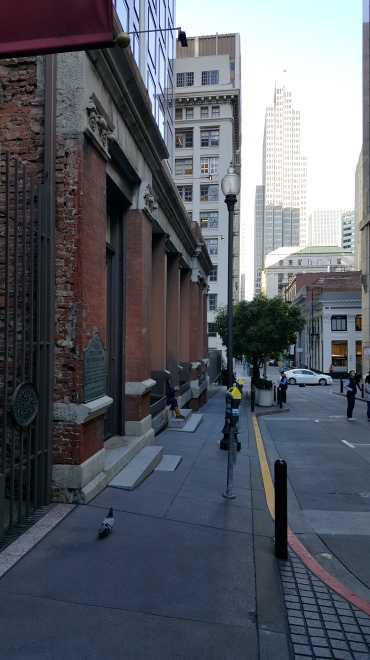 605 and 615 Commercial Street, where Mark Twain worked for the Morning Call in 1864 and where Bret Harte worked as superintendent of the mint.

Northeast corner of Montgomery and Bush Streets, location of Platt’s Music Hall, where Artemus Ward, the world’s first stand-up comic performed and where Oscar Wilde spoke during his visit to the city in 1882. (Ward was part of the original American Bohemian group, including poet Walt Whitman and the most famous actress in 19th century America, Adah Isaacs Menken, who also performed in San Francisco; this group hung out at Pfaff’s Saloon in New York.)

On Christmas eve on 1910, superstar opera singer Luisa Tetrazini gave a free concert for thousands in front of the Chronicle building at Market and Kearney. She was in a dispute with an impresario and couldn’t perform for money, so she gave the people, still reeling from the earthquake and fire and still rebuilding, a concert that inspired a local chef to create chicken tetrazzini.

The top floor of this building at 363 Sutter was the location of the Forbidden City nightclub from the late 30s to the late 50s. The novel, musical, and movie Flower Drum Song was based in part on this club. 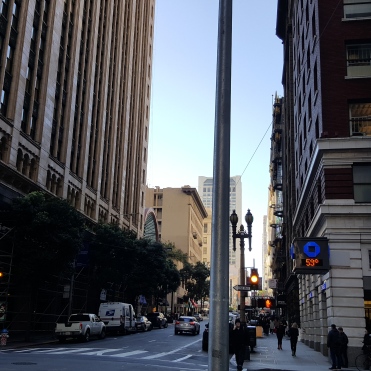 Montgomery and Sutter, location of the Lick House hotel, where Mark Twain lived in 1864, destroyed in the fire after the 1906 earthquake (not certain which corner it was on).

2 New Montgomery Street, The Palace Hotel, built in 1875, burned down in 1906, and rebuilt in 1909. It was host to David Kalakaua, the last king of Hawaii, Enrico Caruso, who was staying there during the earthquake, and Nikita Khrushchev. 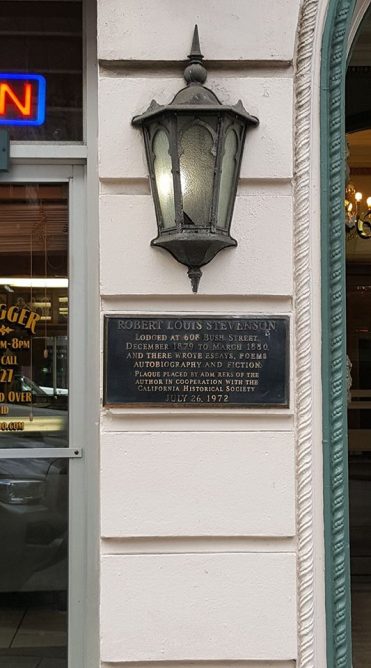 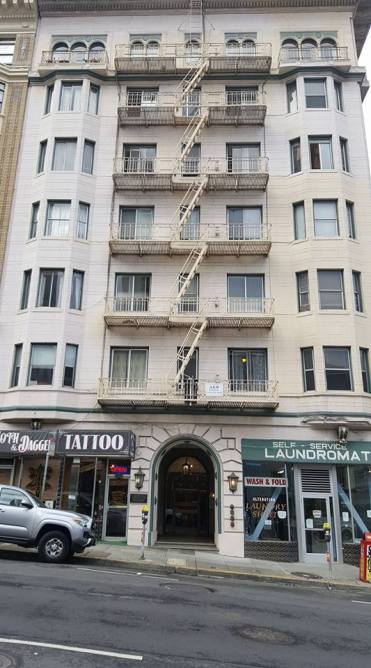 608 Bush, where Robert Louis Stevenson, author of Treasure Island, lived in 1879, while waiting for Fanny Osborne’s divorce to go through so he could marry her, which he did in May of 1880, honeymooning in Napa.

891 Post #401, where Dashiel Hammett lived 1926-1929, and where he wrote Red Harvest, The Dain Curse, and The Maltese Falcon. Hammett modeled Sam Spade’s apartment on his own. It is visible in the upper right-hand corner of the building in this photo (the northwest corner of the 4th floor).

Hammett lived here at 120 Ellis when he first moved to San Francisco in 1921, right across Powell is John’s Grill, at which both he and his character Sam Spade, ate.

Mission Dolores, or Mission San Francisco de Asís, on the old Camino Real (at this point 3321 16th Street), founded in June of 1776.

3119 Fillmore, Gallery Six, where in October of 1955, Allen Ginsberg gave his first public reading of “Howl.”

1712 Fillmore — moved in the 70s during “urban renewal” from its location at 1690 Post Street (2nd photo). It was the former location of Nippon Drug Co., whose owner was interned during the racial panic of WWII. In 1949 the club Vout City opened here, which was mentioned in Kerouac’s On the Road; After Vout’s, in 1950 and lasting until 1965, it was Jimbo’s Bop City, initially a late-night diner patronized by jazz musicians, then a jazz club, where Louis Armstrong, Miles Davis, Dizzy Gillespie, Charlie Parker Billy Eckstine, Billie Holiday, Ella Fitzgerald, Dinah Washington, and Sarah Vaughn all played. Chet Baker ever played professionally while stationed here in the Army at the Presidio.

318 Parnassus (the blue-gray one in the middle with the red-tiled dormers), up the hill from us, where Hunter S.Thompson wrote Hell’s Angels: The Strange and Terrible Saga of the Outlaw Motorcycle Gangs. 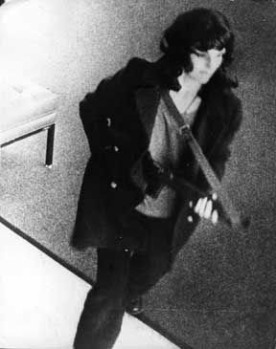 In April of 1974, as a member of the Symbionese Liberation Army, Patty Hearst helped to rob this bank at Noriega and 22nd Avenue in the Sunset. The bank camera here captured what become the most famous picture of her and of the entire decade.

348 Carl, where William Saroyan wrote The Daring Young Man on the Flying Trapeze.

514A 7th Avenue, where Wyatt Earp lived in 1896 with his wife Josephine, 15 years after the shootout at the OK Corral. 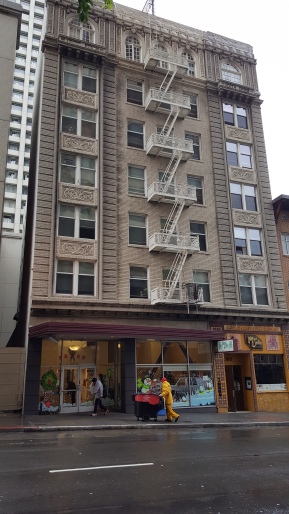 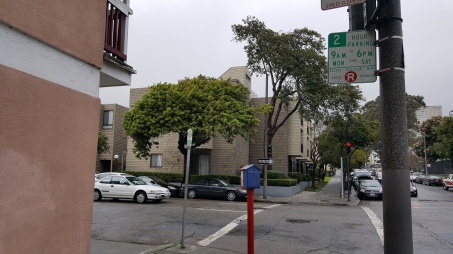 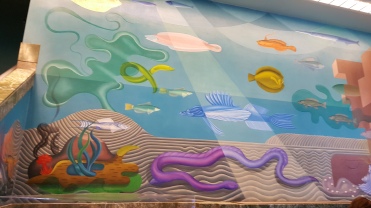 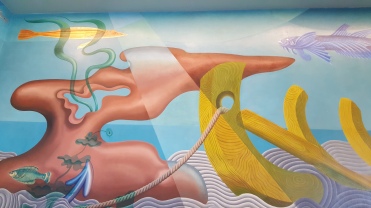 Details of the American painter Hilaire Hiler’s mural “Sea Hunt” in the San Francisco Maritime Museum, located on the cove between Fort Mason and Fisherman’s Wharf. He worked on it from 1936-1939. Hiler was a painter and color theorist as well as a psychologist who made frequent appearances in memoirs and fiction of Paris in the 1920s, including works by Henry Miller and Robert McAlmon.

Robert Frost, though known as a New Englander, was born and lived his first 14 years in San Francisco. He lived in seven houses “north of Market and east of Van Ness” between his birth in 1874 and his father’s death at 1888, when his father died and his mother moved him back to New England. Later, he wrote a poem about Land’s End and Cliff House, called “Once by the Pacific.” This is the monument outside of Embarcadero Station.

FOR MORE PHOTOS OF PLACES OF INTEREST TO THE HISTORY AND LITERARY HISTORY OF SAN FRANCISCO, CLICK THE INSTAGRAM HASHTAG #SFLITHIST.

I am a poet and journalist and so on amber so forth in rows magnet. View more posts