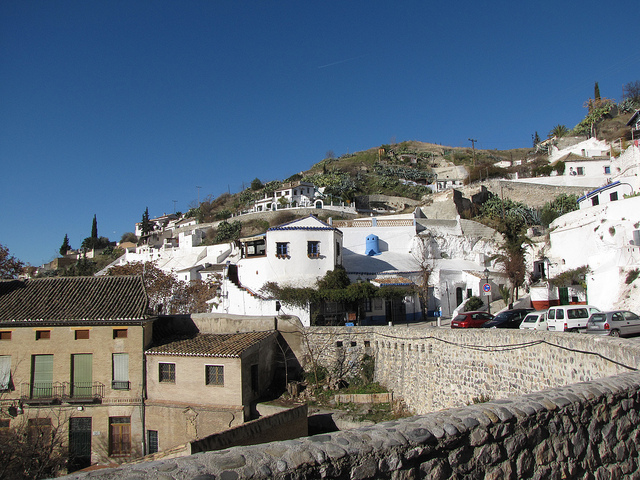 I’ve decided to write my memoir of life among the Gypsies, instead of writing another horrible book proposal or trying to publish another magazine article about it. Not that this will result in the book getting published, but I’ve been thinking about it for years and it feels like something I need to write. I’ll be publishing parts of the draft here.

The sleeper car on the night train to Granada was stifling. The window catch was broken and there was no airconditioning. At first, I tried to prop it open by wedging my arm between the sill and the sliding panel, but invariably I would doze off, my arm would slip out, and the window would bang shut, waking us up in the most alarming way imaginable. I tried this half a dozen times before finally giving up and slipping into a fitful and excessively lubricated sleep.

Later, Van told me he thought he was going insane when my snoring, which was legendary, began to harmonize with itself. It was as though I had begun Tuvan throat singing in my sleep. Eventually, it dawned on him that the only other passenger in our car, a microscopic Japanese girl, was sawing logs with a ferocity and volume equal to my own, and our snores were crossing one another in such a way as to reduce bones to jelly and sanity to madness.

He got even less sleep that night than Yui Snoresayama and I did.

The snoring was only one half of the equation. The eighteen hours of air travel from the West Coast of the U.S. to Madrid was noteworthy for airline food much worse than the already terrible norm. It was so bad in fact that even I could not eat a bite, and my appetite was almost as legendary as my nocturnal opera. Van, who was a neurotic fussbudget at the best of times, and considerably thinner, weathered that storm with even less grace than I. Compounding it was the discovery, upon landing at Barelas, that the waiters had gone on strike. (It’s Europe, everyone’s in a union.) The fact that it was a Sunday turned our quest for a non-union (sandwich) shop from difficult to impossible. Our weakened state was further tested on our seemingly endless walk across town to the Corte Inglés department store to buy our train tickets, and then from there to the station at the edge of the city.

Only later would we discover, today’s mania for “tapas” notwithstanding, that the Spanish shared with their one-time enemies and fellow bankrupt colonizers to the north, the British, a cuisine that could only, at the best of times, be described as “crap.” For the time being, we were spared the knowledge by being spared any food whatsoever. It would be 48 hours before we sat down to eat.

In the middle of this phantasmagorium, we decided we would spend the three hours before we could board the train at the Prado, one of the world’s great museums of painting. In the middle of our stroll through the endless corridors, past paintings by Velázquez, El Greco, and Zurbarán , our paths diverged. While Van encountered Goya’s distressing Black Paintings, I encountered the holy grail. Or the unholy one. There, laid out before me, was the most alarming picture ever painted, The Garden of Earthly Delights by Hieronymous Bosch. Dashing through the Prado, I finally located Van shaking like a Chihuahua on a stone bench.

The travel, the strangeness, the hunger, had turned a man whose resting state was already that of constant vigilance against the threatening into an embodiment of a Knut Hamsun novel, a Hemingway essay, and a Hamlet soliloquy. This propensity toward near psychosis in the face of the unaccustomed would have a profound effect on him later on.

When the sun soaked into the sleeper, that pure, early morning
summer sunlight, all the travails of the previous night and day were forgotten. We awoke and left the car, to stand in the corridor, where the windows actually opened, and gazed rapt as the rocky
gave way to the green expanse of the vega. Granada rose in the distance like an 18th century engraving of Jerusalem. Our hearts awoke with us and the breeze through the green grain blew the cobwebs from our minds. Van turned to me, a smile on his face and wonder in his eyes.

I am a poet and journalist and so on amber so forth in rows magnet. View more posts

One thought on “My Life on the Holy Mountain: Introduction”